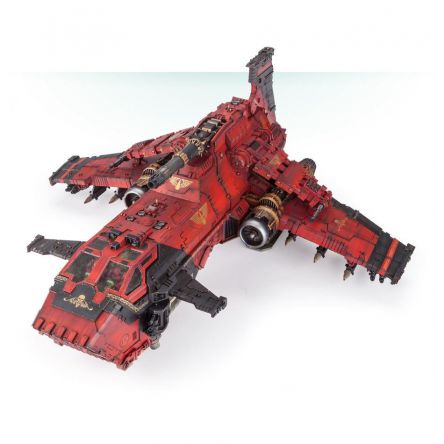 This is a rather large resin kit, which comes as 112 components. Rules for its use are found in The Horus Heresy Legiones Astartes: Age of Darkness Army List and Imperial Armour – Index: Forces of the Adeptus Astartes.

The Thunderhawk Gunship fulfils a number of different strategic and tactical roles. Its primary mission is that of a drop ship but its utility does not end with the deployment of its lethal cargo of Space Marines, for it is a formidable heavy weapons platform in its own right. Equipped with a dorsal-mounted turbolaser, the Thunderhawk is able to engage targets as large as a Scout Titan or super-heavy tank as well as enemy fortifications. In addition to its main weaponry, the Thunderhawk mounts numerous heavy bolters with which it can scour a landing zone clear of enemy troops in a storm of mass reactive shells. An additional payload of wing-mounted missiles allows the gunship to operate in direct support of the squads it delivers into battle.

A frankly excessive amount of firepower strapped to an incredibly striking piece of Space Marines technology, this is the Thunderhawk Gunship; a Lords of War choice for a Legiones Astartes army list in games of The Horus Heresy and a Adeptus Astartes Strike Craft in Warhammer 40,000. Its brutalist, angular silhouette is broken up by a huge variety of weapons – the turbolaser mounted almost dead-centre is just the beginning, with 2 lascannon, 6 sets of missile pylons and numerous heavy bolters dotted about the wings and hull.

Particular care and attention has been paid to the power systems of this craft, with intakes, exhausts, air brakes and retrothrusters all where you would expect them to be. The attack wings, which each feature a heavy bolter turret, can be moved into either a stowed or attacking position, and the air brakes can be left open or closed. The front ramp can be opened and closed to disgorge the Thunderhawk’s cargo of Space Marines; of course, each of these movable components can be glued in the position of your preference. A pilot is included, who can easily be painted in the colours of your preferred Chapter.

This is a rather large resin kit, which comes as 112 components. Rules for its use are found in The Horus Heresy Legiones Astartes: Age of Darkness Army List and Imperial Armour – Index: Forces of the Adeptus Astartes.